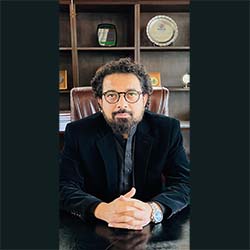 It is an honour to be posted as Director General, Bureau of Emigration & Overseas Employment. Overseas employment is playing a vital role in reducing the pressure of un-employment at home, besides being a major means of earning foreign exchange in the shape of overseas workers' remittances. Overseas employment is thus, serving as the mainstay for the national economy, by providing much needed financial outlay for debt servicing, imports bill, alleviation of poverty, development projects and economic activities. Bureau, being a regulatory body, controls, regulates, facilitates and monitors the emigration process followed by the Overseas Employment Promoters (OEPs), in the private sector, besides ‘direct employment’, the mode adopted by the individuals, to seek foreign employment either through their own efforts or relatives and friends living abroad.

The foremost task of Bureau of Emigration and Overseas Employment encompass collection, compilation and tabulation of emigration data of all those Pakistanis who proceed abroad for employment purpose. In fact, the Bureau has been engaged in maintaining comprehensive statistical record of all the migrant workers since 1971, which provides basis for planning and policy formulation by the Economic Division and other interested government departments.